Malaga, your smart choice to live aboard a catamaran in the autumn or in the winter, for a short weekend getaway or weeks long holiday.

With a reputed 320 days of sunshine a year and a city center packed full of historic and artistic attractions, Malaga is the perfect sunny but stimulating getaway. As the birthplace and early inspiration of Pablo Picasso, it reflects the eclectic and sometimes peculiar nature of his work; wandering around the center’s cobbled streets can feel like a fast track degree in modern art. Malaga continues to lure creative souls, and this year welcomes three artistic attractions.

A branch of The St Petersburg State Russian Museum is newly opened in a converted tobacco factory at Avenida Sor Teresa Prat 15 (00 34 951 926 150; coleccionmuseoruso.es), showcasing art from the 15th to the 20th centuries; meanwhile, 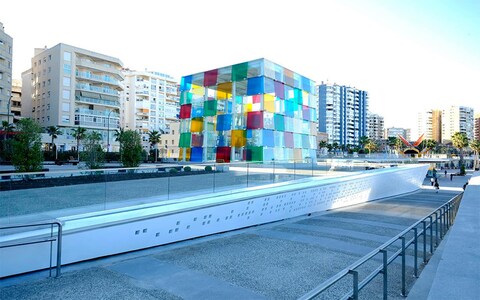 the Pompidou Centre will open its first base outside France this spring, in a glamorous glass cube at Muelle Uno on the waterfront (centrepompidou.es). Completing the trio of cultural treats will be Malaga’s new Museum of Fine Arts and Archaeology, re-opening later this year.

Twist and turn your way through archways and past towering turrets en route to the top of the Alcazaba de Malaga, found via the entrance on Calle Alcazabilla (0034 630 932 987; admission €2.20/£1.60) in time to catch the evening light. Dating back to the 11th century, this was the palace of Malaga’s former Muslim rulers. Experience some of Malaga’s finest food and drink at the Patio de Beatas at Calle Beatas 43 (0034 952 210 350; lospatiosdebeatas.com), where British head chef Christopher Gould and sommelier Julian Sanjuan pair together regional flavors with specially selected olive oils and wines. It’s very popular, so call ahead to make a reservation.

Take a short stroll over to the Mercado Central de Atarazanas, where fresh fish and exotic foods catch the eye at every turn. Tasting is encouraged by the market sellers, so get ready for plenty of unexpected stops. 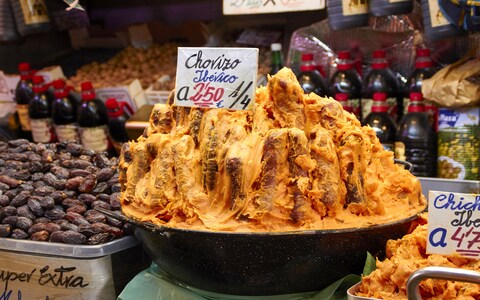 Hire a bike from the cycle station at Plaza Marina and cruise east along the seafront cycle path to the small fishing village suburb of Pedregalejo. Here you’ll find tiny waves lapping against the sandy beach and fishermen pulling in the day’s catch.

Taste some of the freshest seafood in Spain at El Cabra at Paseo Marítimo El Pedregal 17 (0034 952 291 595; restauranteelcabra.es) while overlooking the glistening Mediterranean. The coquinas (cockles fried in oil and parsley) are sensational, while the cool sea breeze makes it a welcome relief from the heat of the city center.

Back in the city, take your pick of some of the art on offer at either the St Petersburg State Russian Museum or the Paris Pompidou Centre (centrepompidou.es).

Then it’s time to unwind at the Hamman Al Andalus at Plaza de los Mártires 5 (0034 952 215 018 malaga.hammamalandalus.com) with a dip into the many heated baths. Originally brought to Andalusia by the Moors in the 8th century, the baths are the perfect way to freshen up. Bathing plus a 15-minute massage cost €43 (£33). 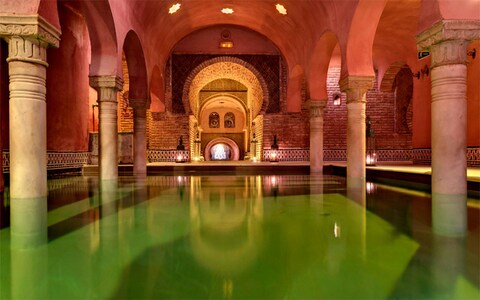 Follow in the footsteps of film stars, heads of state and Picasso himself at the nearby El Pimpi restaurant on Calle Granada (0034 952 228 990; elpimpi.com). Giant oak barrels full of sweet wine leave a fragrant aroma hanging in the air, and the seafood menu is both vast and reasonably priced.

Marvel at the changing styles of prolific Pablo Picasso at the Picasso Museum at Palacio de Buenavista San Agustín 8 (0034 902 443 377;museopicassomalaga.org). Spanning everything from his well-known Cubist paintings to surreal sculptures and sketches, here you can see just how diverse, resourceful and talented Picasso really was. Admission is €6 (£4.40).

Get revved up at the city’s impressive new Automobile Museum at Avenida Sor Teresa Prat 15 (0034 951 137 001; museoautomovilmalaga.com). This celebration of car culture and history also includes fashion exhibitions and installations. Admission is €7.50 (£5.50)

Finally, feast on stunning views and delicious Andalusian food at the Parador de Malaga Gibralfaro restaurant  (0034 952 221 902; parador.es). The menu is packed full of Spanish dishes and includes lots of fresh seafood. There’s also a beautifully shaded veranda that encircles the restaurant, making it the perfect place for a long and lazy lunch on a warm day.

Malaga is a fantastic city break destination as it is filled with hidden gems and secret spots. Alternative street art fills empty walls and narrow streets are filled with quaint cafes, buzzing bars, and unique boutiques. It’s a city offering the best of all worlds – traditional Spanish architecture mixed with modern, luxurious buildings and colorful, lush gardens with an easygoing beach environment.

Malaga is very walker-friendly and so without a doubt, the best way to explore this city is by foot. You’ll see many things traveling by foot that you’d miss any other way. We’ve created three walking routes for exploring some of the best parts of Malaga city – Picasso, Art and Culture and Historical.

These routes aren’t just for art and history lovers, they are suitable for everyone as they include some of Malaga’s most beautiful and interesting landmarks.

Malaga is the birthplace of Pablo Picasso, one of Spain’s most famous artists. Regardless of whether you are a long-time Picasso fan, an art lover in general or just interested in learning more about the artist and the city, this route will guide you to the key points of the city related with Picasso, starting at the Fundación Picasso Museo and ending at the old site of the San Telmo School of Fine Arts in the Plaza Constitución.

This route includes a number of museums and also a long walk through the Parque de Malaga, which is actually optional but we recommend it because it offers some respite with its shaded, cool areas and benches to sit on and rest tired legs. With that in mind, the route can take between two and four hours, depending on how quickly you walk, which museums you choose to visit and whether you choose to go through the park.

As with the majority of walking routes, we recommend that you do them outside of the very hot summer season between June and August. The winter in Malaga doesn’t usually get colder than about 12℃, so if you wear a coat or jacket then the crisp sea air makes for a very welcoming temperature to walk around the city. Having said that, we’d say that the best times of year for a city break and to do some walking routes are between March and May and September to November. These months of the year promise beautiful sunny days but a cooler temperature – perfect for hours spent exploring a new city.

Not only will you see some beautiful historical architecture but you’ll also get to sit on a bench in Plaza de la Merced next to a very popular bronze statue of Picasso himself.

The «Art and Culture» route is fantastic for getting to know the heart and soul of Malaga. Discover street art by Malaga’s locals at the first point located in the Lagunillas neighborhood, whose streets are filled with every kind of painting and graffiti, you’ll see more in the Soho neighborhood as well. The La Termica Cultural Centre is the last stop on this route where you can immerse yourself in Malaga’s creative world, with concerts, performances, workshops, markets and much more.

The majority of points on this route are indoor and so there really is no best time of year to do this route weather wise. It would be best to start early in the morning if you want to complete the whole route as the last point – La Termica – is quite a walk away, in the west of the city.

One of the most artistic areas in the city – Lagunillas. This is the part of the city where a lot of Malaga’s new, young artists draw and paint graffiti which was originally introduced by the residents in this area. You’ll find it just around the back of the central Plaza de la Merced and although it’s right in the city center, strolling through these streets make you feel like you are somewhere else completely.

Malaga’s history is colorful and enticing. Evidence of the city’s past can be seen in its impressive Gibralfaro Castle sitting atop a hill, its unfinished yet nonetheless strikingly beautiful Cathedral, its plentiful Moorish architecture, its ancient churches and fascinating squares which are an enticing mix of old and new, past and present. Although we’ve named this route the «historical» route, it also serves as a fantastic way to get to know Malaga well in a short space of time, by taking you to its most spectacular landmarks and monuments.

Allow yourself three hours to complete this route, obviously, the time will fluctuate depending on how much time you spend at the churches and monuments.

Bearing in mind that the route includes a couple of Malaga’s best museums and churches, a good idea is to check the opening times before you go to ensure you get the most out of each visit. Starting early in the morning is optimal to allow yourself enough time to complete the route at your own speed and to get the best light for photographs.

Numerous landmarks and monuments which represents thousands of years of Malaga’s intricate history.